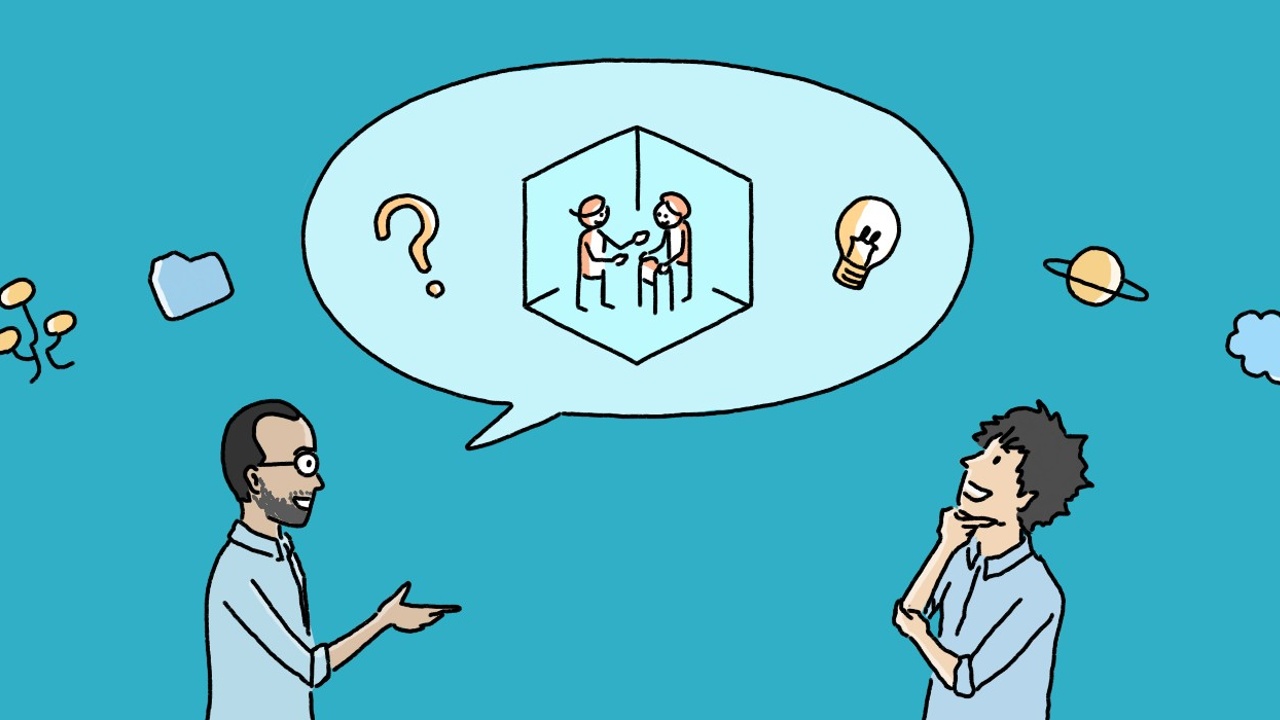 Every day, in all kinds of scenarios, we speak in metaphors without thinking twice. In fact, the ability to think with metaphors is so hard-coded that we create and reuse them without really knowing we’re doing it.

In a similar way, designers are always working with metaphor, often without realizing how much of a role it plays in their practice. This isn’t surprising; metaphor is an inherently human tool that helps people make sense of the world, and so it’s a natural material for designers to play with.

Without an awareness about how we’re using metaphor, we miss out on its full potential, such as its ability to spark conversations about change. This is especially important for design leaders, who are trying to influence organizations to bring a customer focus into decision making.

Being more intentional in your use of metaphor can help elevate your design practice. To reconnect with metaphor, let’s look at three ways that designers can use it in their work: to describe complexity, to create new ways of approaching a problem, and to persuade an audience of the need for change.

Metaphor describes complexity to others. The trash can on your operating system is one of the most pervasive and recognizable examples of a visual metaphor. The function to delete a file is actually quite complex, involving marking portions of hard-drive space to be written over once they are needed. By using a metaphor, the user can apply a familiar mental model to understand and access this function; not only is the trash can a way to remove unwanted items from your computer, but just as in real life, you can fill it up and empty it later. If you throw something out by mistake, you have an opportunity to get it back.

Shopping carts, libraries, and platforms are all examples of descriptive metaphors at work in our digital world.

When you’re working with metaphor in a descriptive sense, try to pick metaphors that have a straightforward and intuitive connection to the concept you are describing. The key here is to be context specific: thinking about when, where, and how your audience will experience this complexity will help you find relevant metaphors that will make sense in that moment.

A metaphor can serve as a petri dish for new ideas to form. If you’ve ever facilitated an idea generation workshop using the ‘Parallel Worlds’ activity, you have put metaphor to work in this way. Parallel Worlds asks participants to expand the field of potential solutions by making connections to similar scenarios and contexts.

For example, if a team of designers is interested in helping older workers get more proactive about retirement planning, they might consider other activities where people are already good at planning. They might think about wedding or holiday planning, or even something more removed, like Agile project planning. In each case, the designers are creating a new space provided by metaphor to consider their original problem from a different angle.

When employing metaphor in a creative sense, try to move beyond straightforward, logical comparisons. Essentially, when you force new and strange connections using different metaphors, you’re reframing the problem, which leads to ideas that couldn’t have otherwise emerged.

Quantity also helps. As with any creative push, exploring numerous and varied creative metaphors gives you the best chance of stumbling on to a breakthrough idea.

Persuasion is about convincing someone to change something about themselves — fundamentally, their beliefs. Many designers intuitively know that storytelling is a good way to achieve this. A carefully crafted visual metaphor fully realizes that principle by depicting character and action to appeal to those in positions of power. To demonstrate, let’s take a look at a case study.

Recently, we were working as service designers in a company that provides care to elderly people in their homes. At this company, projects were led with a very technical approach which focused on systems and processes. The concept of customer experience was seen as icing on the cake — something to think about later once you had the foundations sorted out. As a result, designers were often invited into the project when it was too late for them to have any impact. We needed to persuade leadership to see customer experience differently, so that it is considered upfront rather than as an afterthought.

To do that, we showed them this image, and then we told a story: 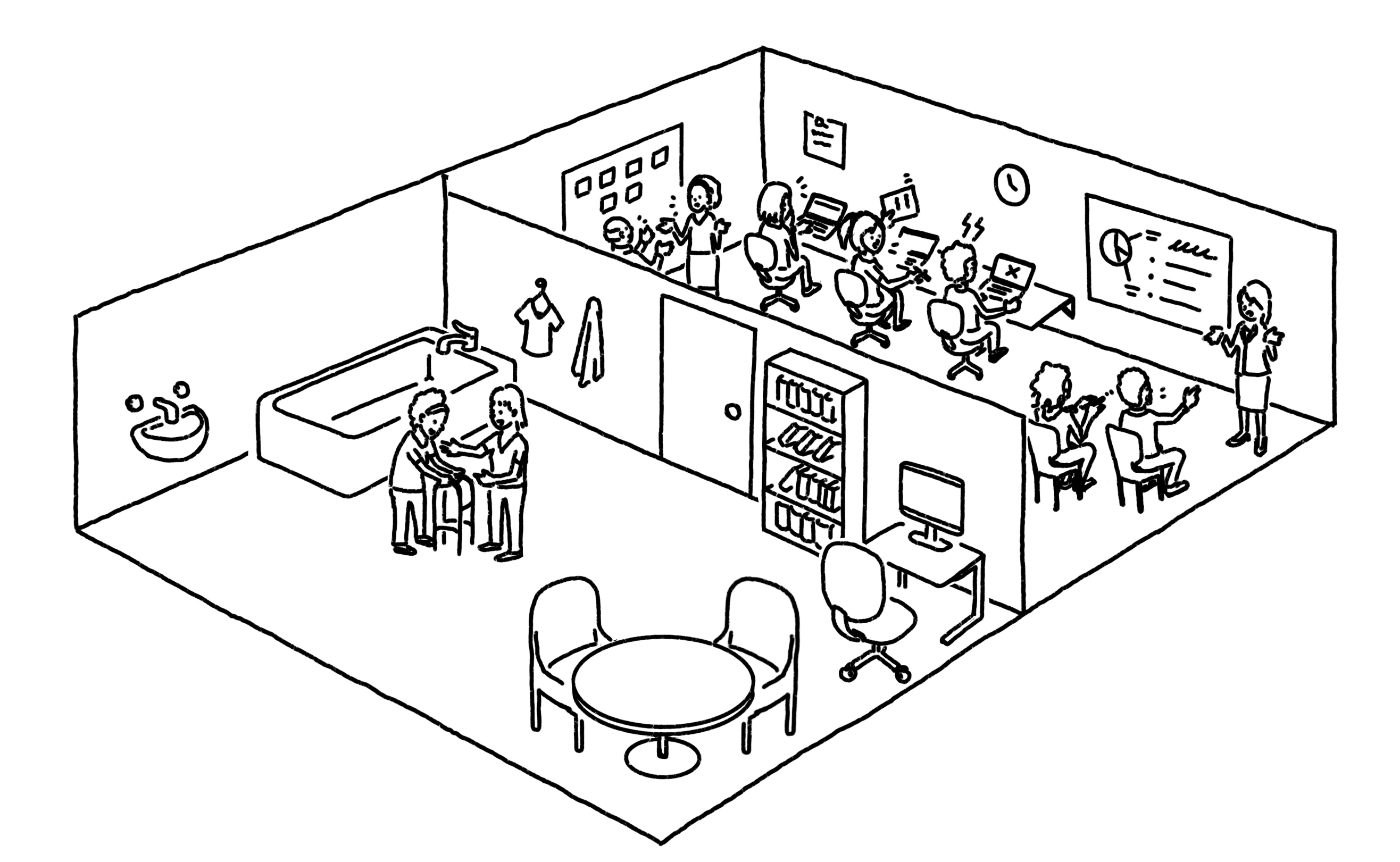 The story goes on to describe the service in this new context. Every morning, a care worker comes to help the customer get showered and dressed for the day. Later on, another comes to take the customer out to the supermarket, then help prepare a meal. Because the service is delivered so effortlessly, the customer forgets that there is a whole business humming away in the spare room, with people responding to scheduling issues, upgrading systems, and so on.

But even a well-oiled machine can jump a cog. Some marketing material creates an expectation that can’t be met, or a new care worker arrives without knowing the customer’s routine, which makes the customer miss bingo. Sometimes, something goes so wrong that a stranger in a suit pops their head out of the spare room to give the care worker a new policy, or explain that a system failure means things are going to be a little bumpy today. The customer is shocked — the opening door has interrupted an otherwise intimate moment between the customer and care worker. 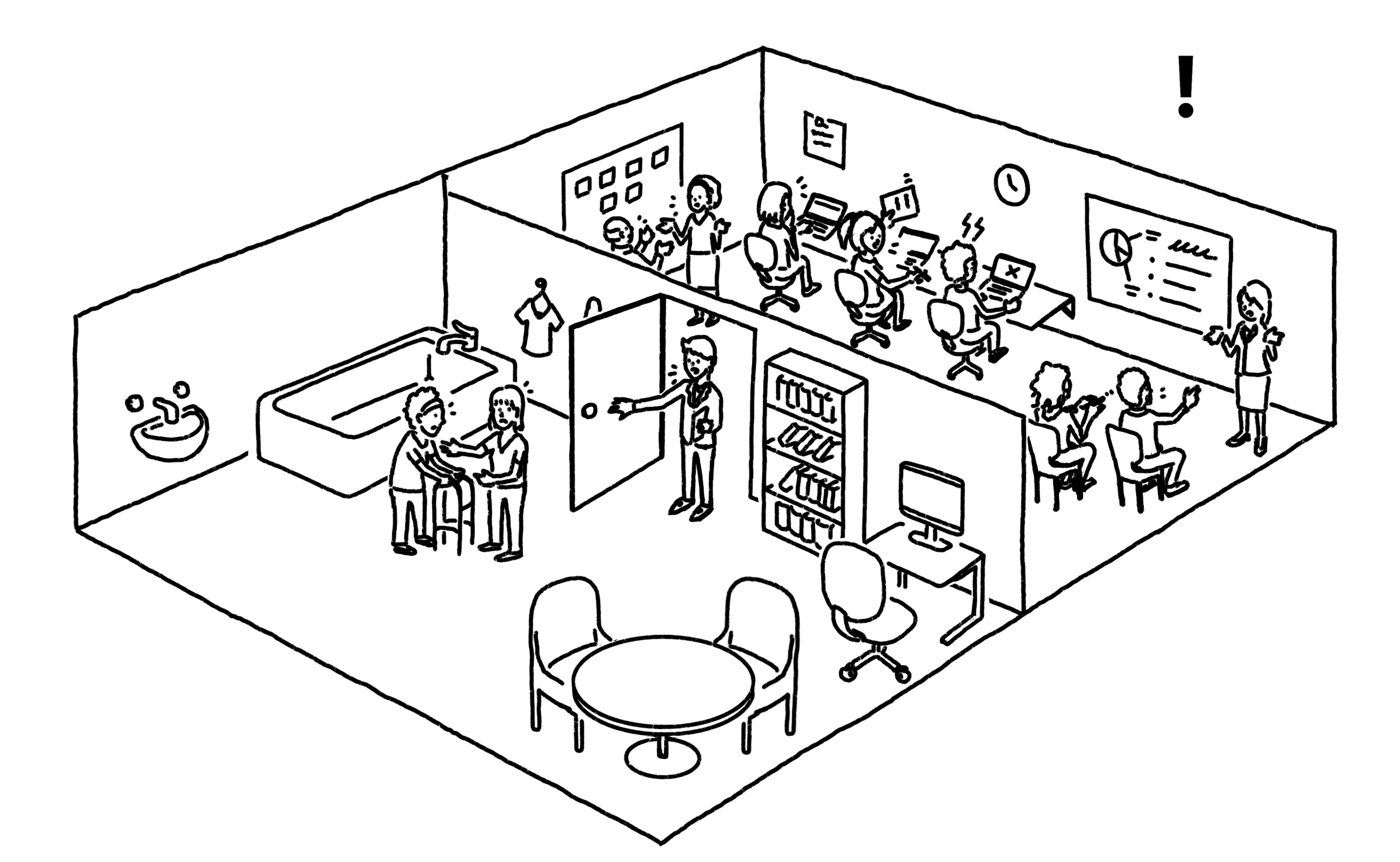 In this metaphor, good customer experiences are created when an organization sets up frontline workers with everything they need to deliver the service, and then stays the heck out of their way. Meanwhile, designers view their role from the same angle as the perspective of this image — we are thinking about how to protect the human intimacy of providing care between two strangers without unnecessary interjections into that space.

Metaphor and story: A persuasive combination

The above metaphor has been successful in a few ways. Firstly, we noticed that the metaphor sticks with people — we’ve heard executives using the phrase “keeping the door shut” in their presentations. Secondly, we’ve been encouraged to spread this story around the organization and present it to other teams. Importantly, designers are being brought into conversations about problems the organization is having right at the beginning, rather than last minute.

But what is actually happening here? Isn’t this just a simple metaphor that compares the backstage delivery of care to the sharing of physical space? Well, the key ingredient that makes this metaphor persuasive is story. Story creates an emotional response when the door opens and someone appears in a suit, shocking the customer.

This story is a little different to the customer stories designers are used to telling. The central actors are the business people — they are the characters with choice and agency. This invites stakeholders to step inside the world the metaphor has created — one where the organization tries very hard to stay hidden and allows the magic to happen — and see their role in removing obstacles to make this world real. 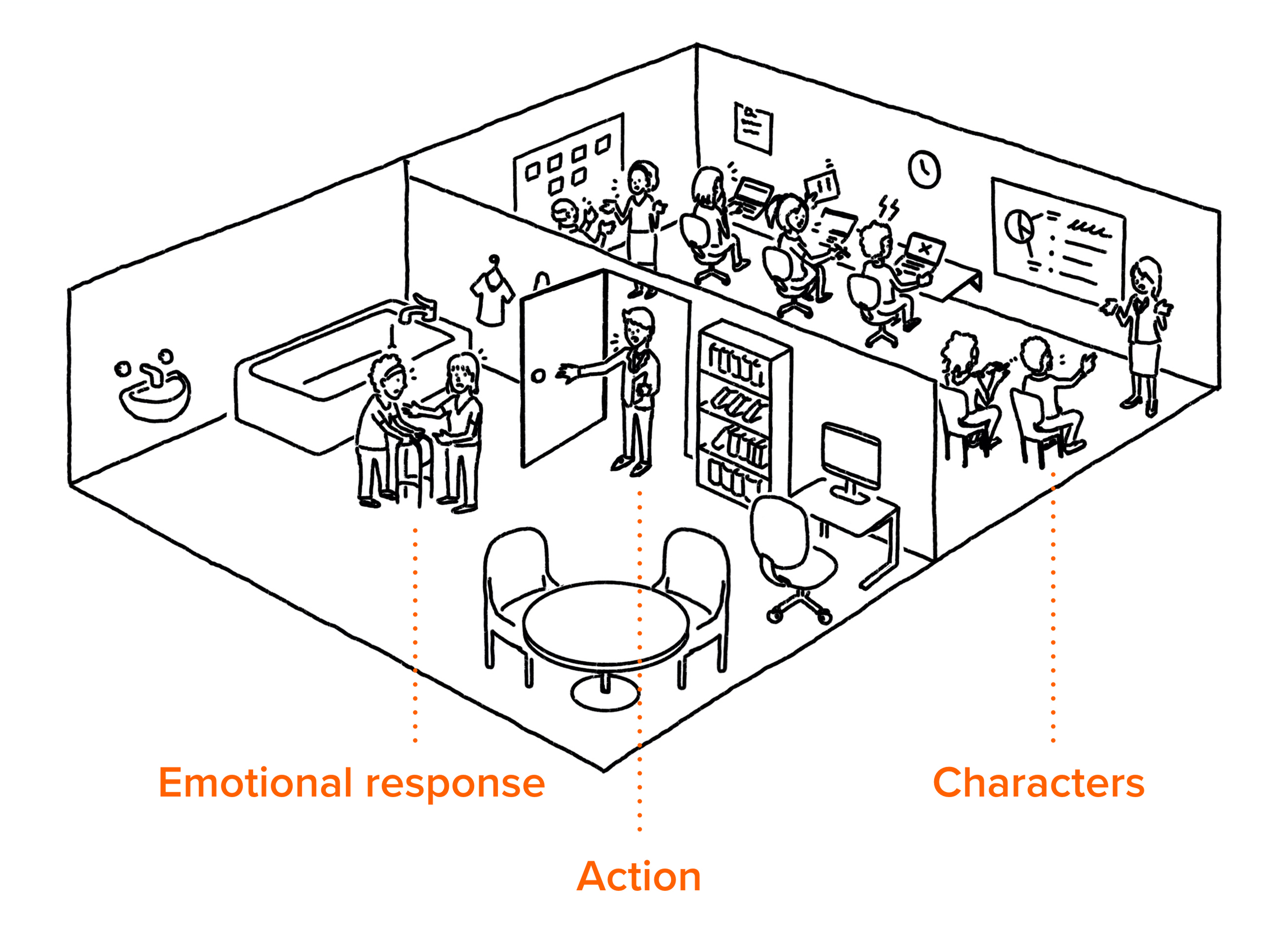 Once inside this world, we can host a discussion about the differences between the current world and new one. We can ask, “Why does this new world not yet exist?”, and, “How would we have to change the current world to create the new one?” In this way, metaphor gets us talking about change.

It’s here that the visual presentation of this metaphor is important. The illustration paints a richer picture of the story and anchors this conversation. People can huddle around it and point at the different parts to identify where they see themselves now and into the future.

If the role of the designer is to create change, then the ability to persuade others is fundamental to design. Next time you are faced with the challenge of influencing change, think about the metaphors which are already being used in conversation. In what ways are they describing complexity, or creating a new way of looking at a problem? And most importantly, how could these metaphors be evolved to include characters and storytelling, so that your audience can see their role in creating lasting change?

Will Farrier is an Australian Service Designer, who believes great customer experiences are fundamentally driven by nurturing, collaborative work cultures. Will’s interest in the role of metaphor in design is motivated by his background in literature and creative writing, as well as a focus on visual thinking. Prior to moving into corporate design, Will was part of the team that created the world-leading ethical fashion platform, Good On You.

Justin Cheong is the founder of Visual Academy. For years, he has taught sketching to designers as a way to enhance the storytelling and creativity within their practice. Justin is an instructor at General Assembly, an editorial illustrator for Adobe, and a conference speaker who has presented at events including Design Leadership and UX Australia.

This article was originally published on Adobe XD Ideas here.