A visual metaphor for the internet in 2020 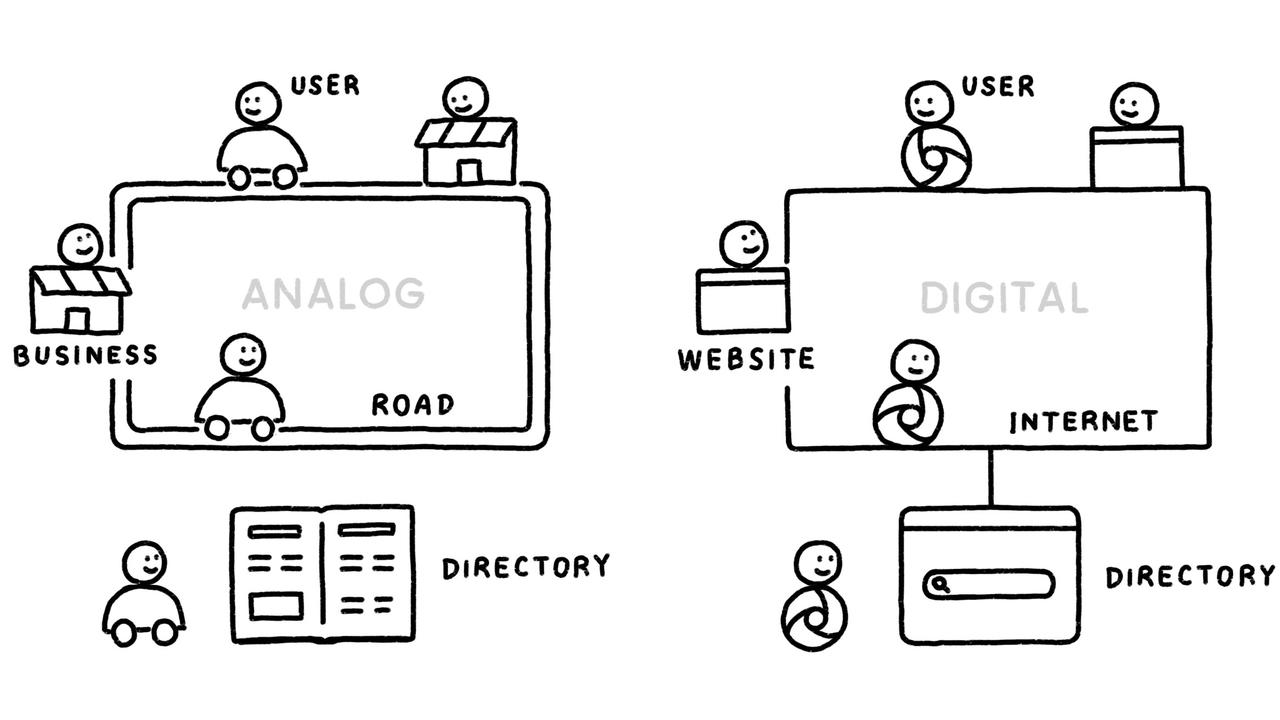 It’s 2020. Technology trends continue to accelerate, thanks to a massive transition to remote work. Meanwhile, people across the world face social and economic uncertainty amid a global pandemic.

How did we get here? What happens next?

As visual thinkers, one way we can make sense of complexity is via the use of metaphor. Metaphors are a part of everyday life. When we use metaphors to access unfamiliar situations, we can make better sense of them and be better able to chart a path forward.

To help us make sense of our current world, I’d like to tell a story using our analog world as a metaphor for our digital one. This is a story about our internet in 2020.

1. A world of roads and directories 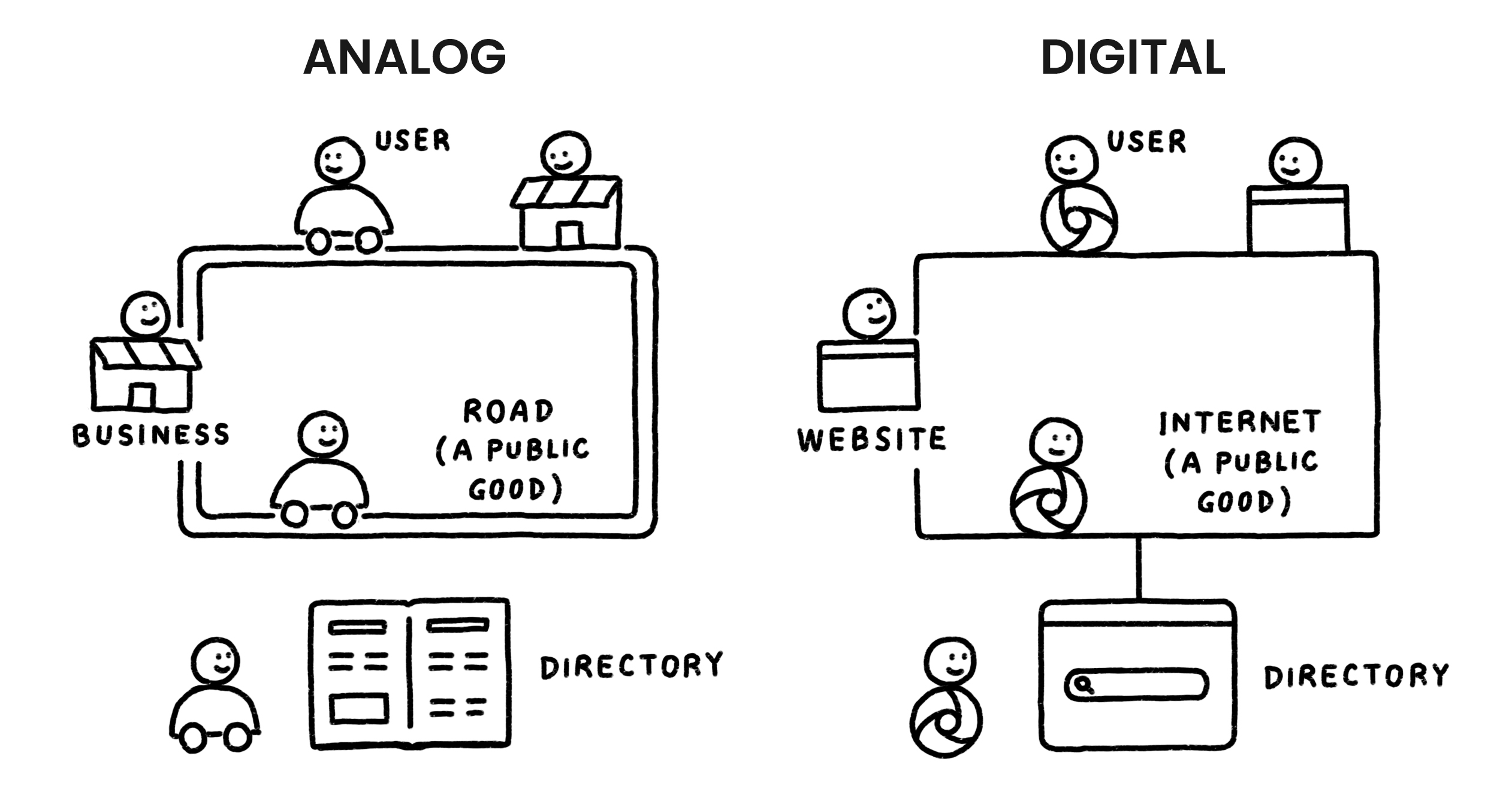 Our story begins with two worlds: analog and digital. Let’s start with analog.

Back in the analog world, when a business was established, it needed to have an address and be listed on a directory in order to be found. In that sense, our roads were a public good that enabled people to travel to businesses, while directories helped people to find the businesses they want.

In the new digital world, things were different, but the structure was largely the same: the internet became the “roads” of virtual space. Like our roads, the internet was a public good. Meanwhile, private companies provided search engines that served as directories for those roads.

Over time, a difference emerged between these two worlds. In the analog world, businesses accepted money as a form of payment. In the digital world, some providers were happy to accept data instead.

In the dollar sense, users who paid only with their data received digital services for “free”. However, every time they accessed those services, they also gave the provider something of immense value: personal information that the provider could use to improve their services, or re-sell for money later.

3. The great rush for data

This is where the two worlds began to diverge.

In the analog world, if a business decided to increase its price, people would eventually be deterred and went to buy from another business instead. In that sense, price competition kept the markets balanced.

In the digital world, if a business asked for more data, people were barely deterred. To an average user, there may have been a bit more reading and scrolling through T&C’s, but the cost felt the same: click on “I Agree”. This data helped businesses to improve their services, which led to more business, in a virtuous cycle for both businesses and users.

Over time, digital businesses who collected the most data and made the best use of it improved their services the most. Some of those businesses became monopolies in their space.

In both worlds, public interest information is disseminated through news. People need news in order to know what’s going on with their society and government, so that they can make informed decisions in their day-to-day.

However, in the digital world, as the directories consolidated and grew, people stopped going to news websites for their news. Instead, they went straight to news directories such as Google. People started to go through the directory to get to the news. 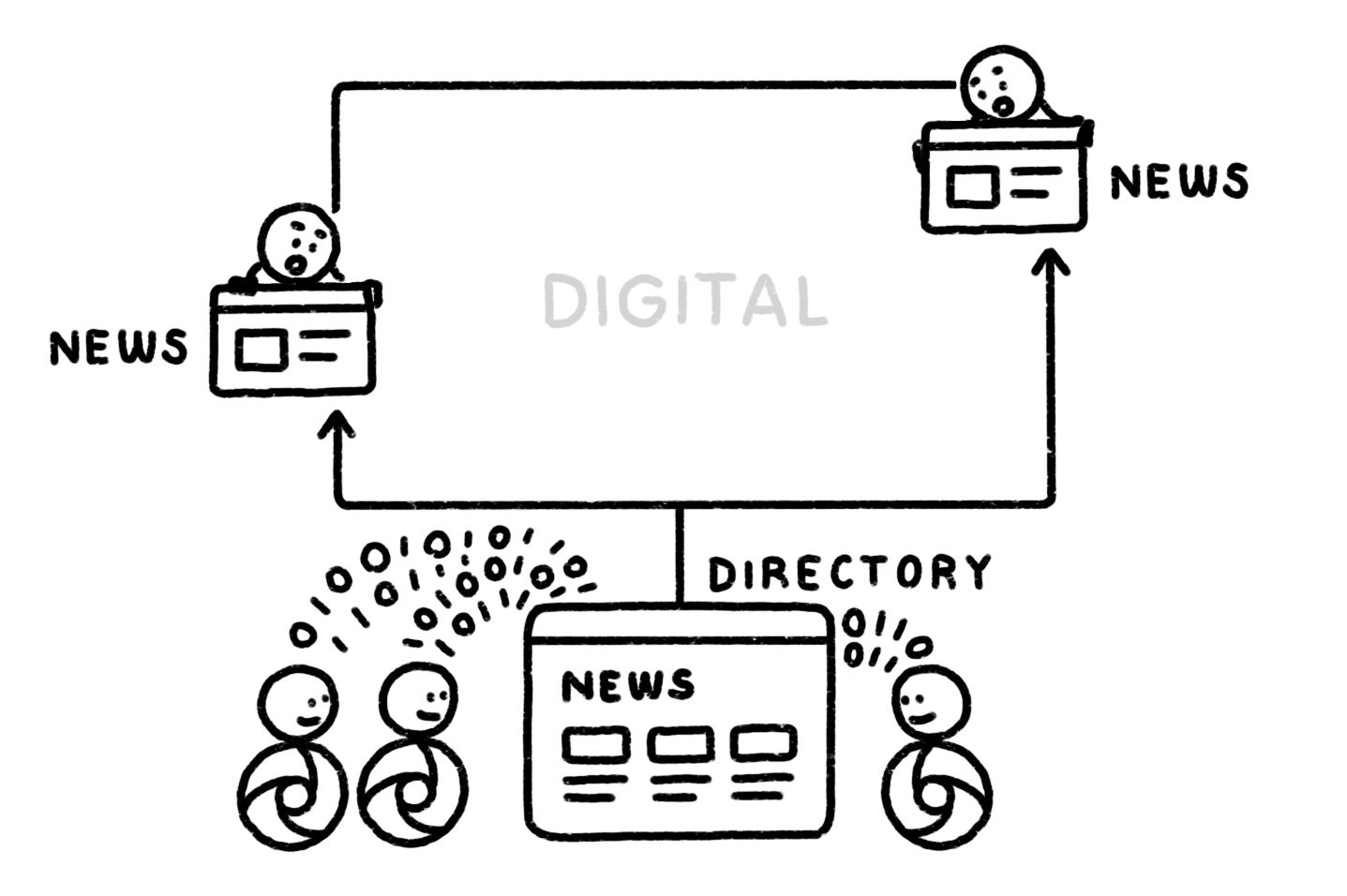 To increase the visibility of their content, news businesses started to tell stories that would better serve the algorithms of the directories. However, they also started facing competition from everywhere. Suddenly, a lot more businesses were competing to have their content seen. 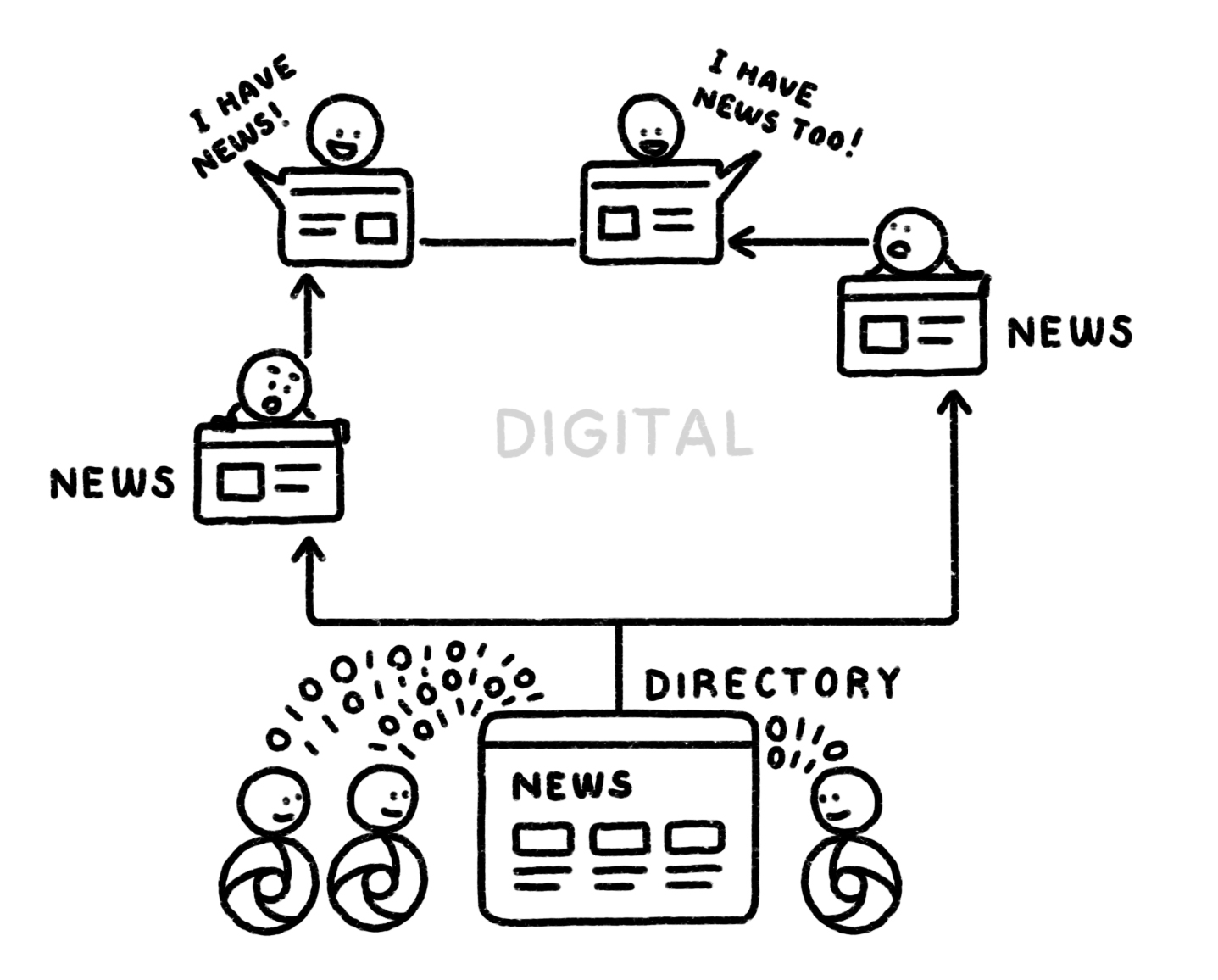 As the digital world expanded, this pattern unfolded not only in news, but across all industries. Examples included:

Over time, each directory became a singular gateway to its own unique ecosystem. Those ecosystems became the cities of the digital world, each with its own rules of exchange defined by the directories who govern them. 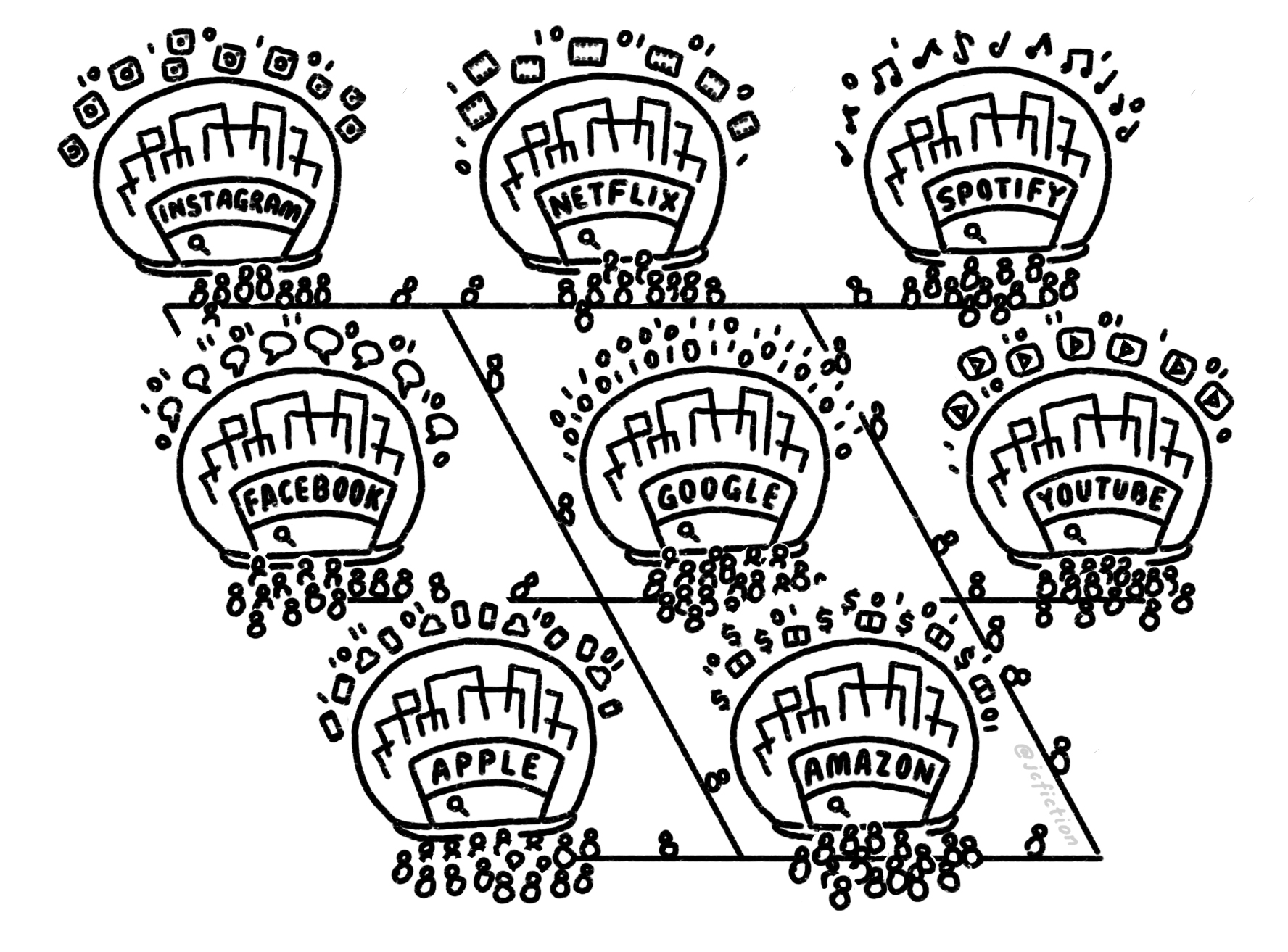 The digital world brought massive benefits to society. Thanks to the directories, people could access almost anything quickly and conveniently. For businesses, directories enabled them to sell goods and services to more customers than ever before.

The digital world thrived, fuelled by the expansion of the data economy.

However, things weren’t smooth for everyone. As more businesses transitioned to digital, competition intensified. Meanwhile, in order to maintain their ecosystems, directories charged businesses a toll — up to 30% of their revenue — in order to be listed in their cities.

Some businesses tried to challenge this arrangement. Epic Games, owner of Fortnite, tried to sell virtual goods directly to users within a city called Apple iOS. This meant Apple wouldn’t receive a toll even as users accessed Fortnite via iOS. Apple responded in kind, and removed Epic from their ecosystem. As a result, Epic lost access to the city and its hundreds of millions of visitors. 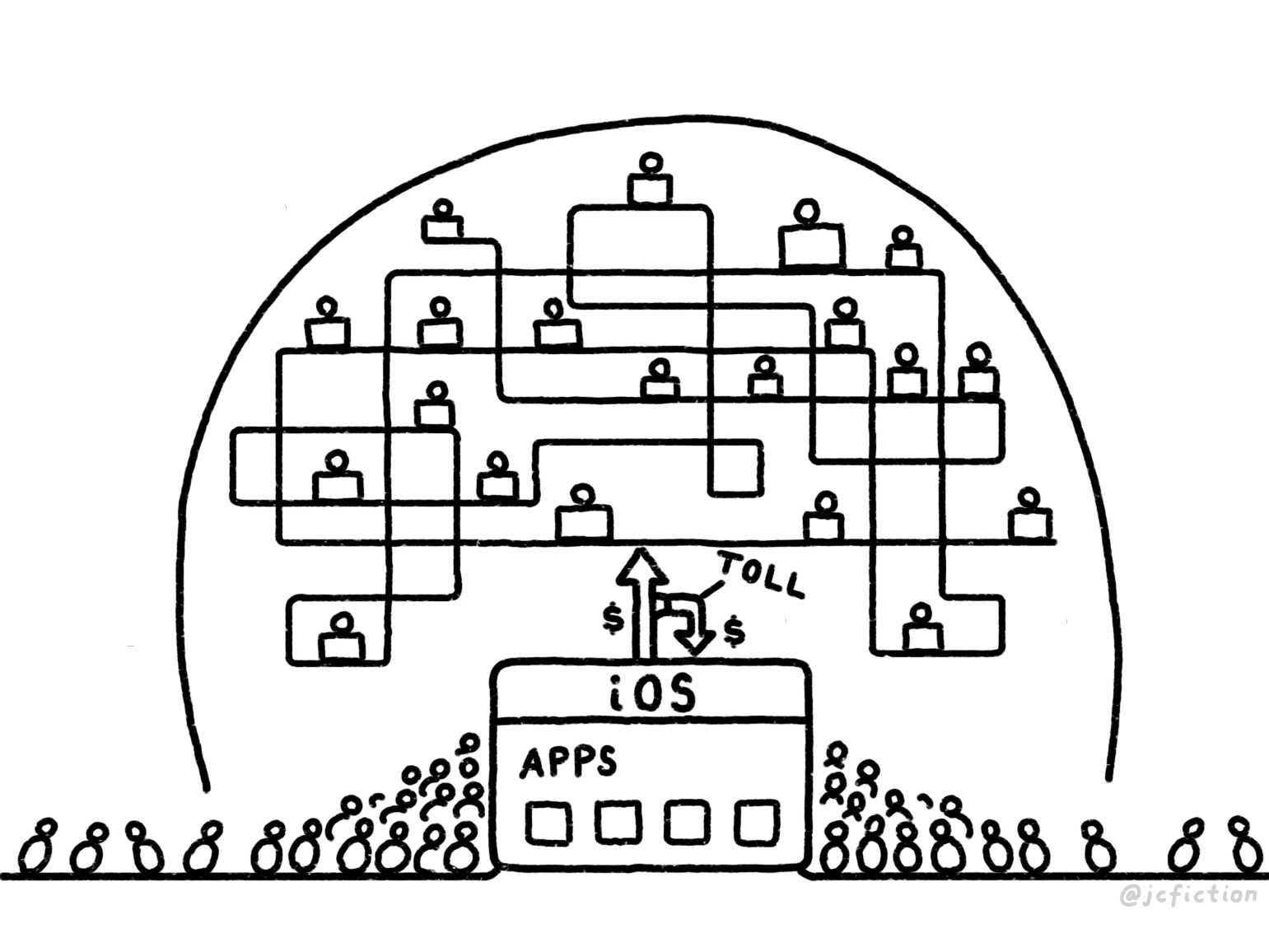 As all this happened, something else became apparent: the directories were now being accessed by people across the planet. 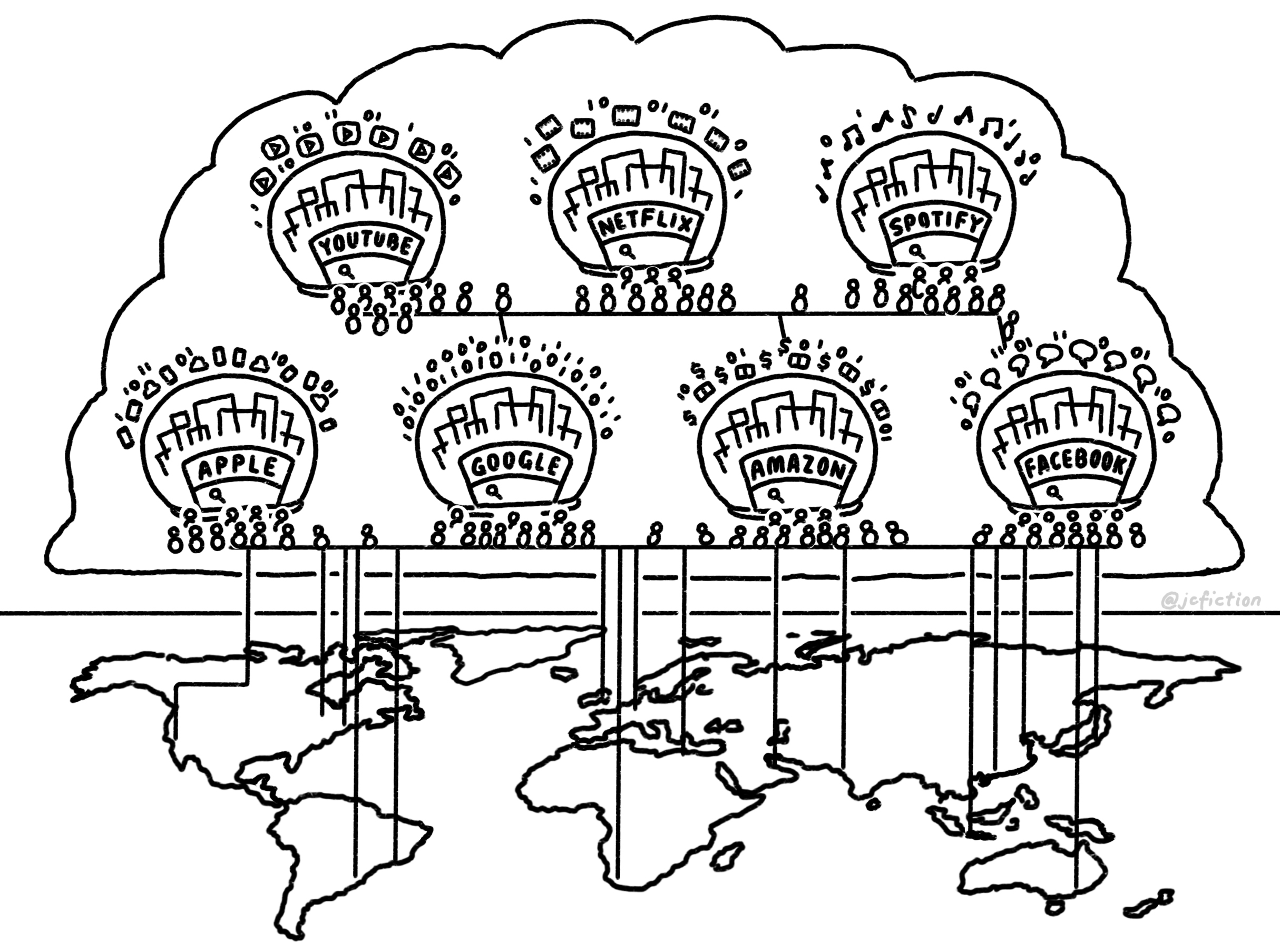 While roads in the analog world connected entire countries, the internet connected the entire globe.

To a consumer, traveling the internet wasn’t costly at all. Directories made the whole world convenient and accessible from anywhere. However, a cost had been slowly accruing across parts of society.

As this happened, directory businesses accumulated a lot of money via their tolls. The biggest ones became trillion-dollar companies. However, because their business models were based on the digital world, governments across the analog world couldn’t extract much in the form of tax. Not even the government in the home state of those companies — the United States.

A group of people including designers, developers and content creators has been a key part of this story.

Working alongside businesses, our mission has been to make services accessible and convenient for people. We do this by applying our collective expertise to create positive experiences in the digital world.

Meanwhile, as everyday users, we also add to the digital world via our consumption, engagement with content and support for the things we enjoy.

However, as the digital world flourishes, parts of our analog world are in decline. So, let’s all take a step back to see why.

How might we make it so that both of these worlds can thrive together? 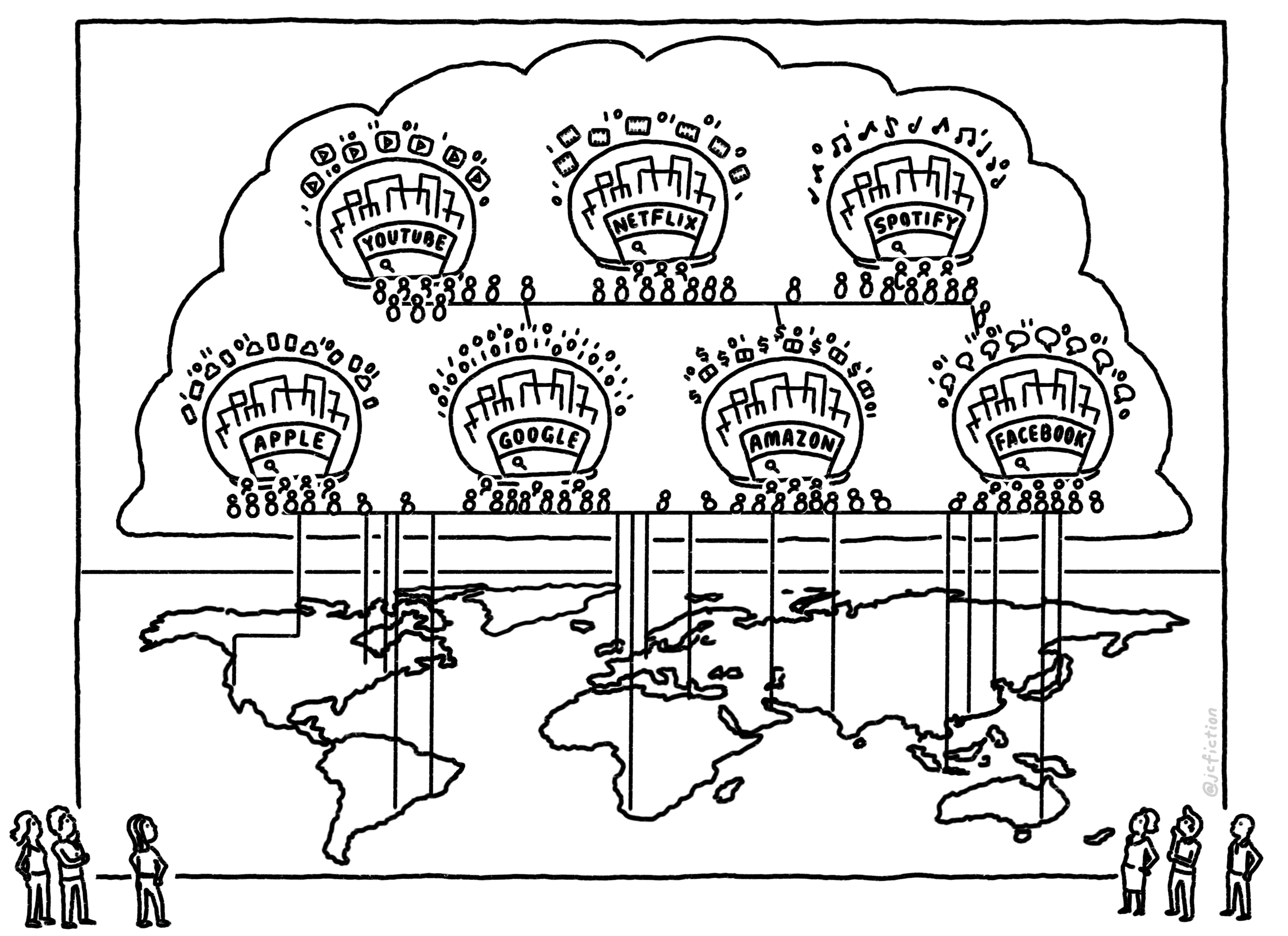 This article was originally published on UX Collective here.